What a beautiful Royal
wedding ~~ yes, we got
up to watch which was so
much better than bits and
pieces . This was Queen
Victoria's 4th Great-grandson.

The choirs were pristine.
Here's the composer
who was commissioned for one
of the hymns.

Are you waking early for the Royal Wedding?

Emma is.
She figured out who
is who.... back to Queen
Victoria and King George VI
( The King's Speech), now
to the Prince!
We're getting up early!

From Robert Coles'
The Call of the Stories:
Teaching and the Moral
Imagination:

"One keeps learning by
teaching fiction or poetry
because every readers'
response to a writer's call
can have its own startling ,
suggestive power, as my
parents tried to convey."

My students did that today
when doing The Way of the
Will Chart for the characters
of Uncle Tom's Cabin. They
debated at length who went
where on the chart. Who was
led by selfish desires and where
did it end. Who was led by the
will that bends to a higher call
and principles.Where did that end.

Posted by Bonnie at 6:02 PM No comments:

in the sanctuary of God

When I thought to know this,
it was too painful for me;
Until I went into the sanctuary
of God;
then understood I their end.

D. Martyn Lloyd - Jones writes
in Faith Tried and Triumphant
on this Psalm:

It gave him understanding ,
it put him on his feet.
HOW was he given understanding?
The answer is what happened to him
in the sanctuary taught him to think
aright.

I am thankful for sitting in
the sanctuary this past week
and Easter Sunday! 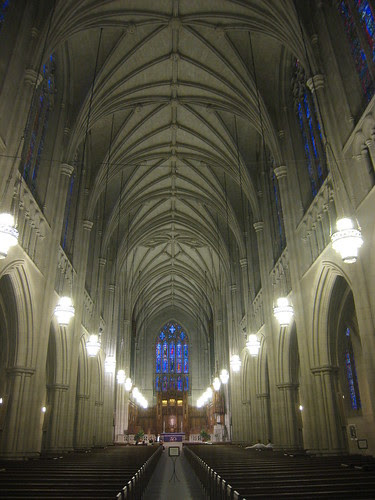 Emma
said
you
have
to
be
quiet
in
a
church
with
grandeur.
Your
voice
travels.
Echoes.
Much
more
meditative.
You
look
UP
most
of
the
time.
Upwards.
Heavenwards.
Glorious
worship.

Drove to
Duke Chapel
today.
First time for
Emma.
First time for
me to do
The Stations
of the Cross.
The rain started
just as the last
stations finished.
It was done out
on the front steps

and lawn of the Gothic Cathedral.
Mime actors froze into the action of
each station making your mind think
upon that frozen drama.


Surely he hath borne our griefs, and carried our sorrows.

But he was wounded for our transgressions, he was bruised for our iniquities: the chastisement of our peace was upon him; and with his stripes we are healed. Isaiah 53 : 4-5

Edges of His Ways


It seemed like JOY came
down from heaven today
as I looked through a
bookshelf in a thrift store:
a HELP Center that the proceeds
go to help those in need in the
small town. I used this
devotional for 3 years , always
go back to it and have my mother's
copy that I gave her. Paperback.
There was a second edition hardback:
3.0o. 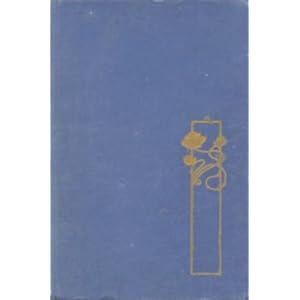 "And shall I pray Thee change Thy will, my Father,
Until it be according unto mine?
But, no, Lord, no, that never shall be, rather
I pray Thee blend my human will with Thine.

I pray Thee hush the hurrying, eager longing,
I pray Thee soothe the pangs of keen desire—
See in my quiet places, wishes thronging—
Forbid them, Lord, purge, though it be with fire."
— Amy Carmichael
Posted by Bonnie at 2:05 PM 2 comments:

More than a Bookstore


Hearts and Minds Bookstore
is located in Dallas, PA.
They are located online too.
They were at IAM's Encounter's
Conference and are always in
Critique of Ransom Fellowship
( highly recommend ).

Their blog this week is on Short
Books for Holy Week.
A great review of a NEW
Wendell Berry book on the
poet -doctor:

The Poetry of William Carlos Williams of Rutherford

You can see where this is going---imagination in place! William Carlos Williams of Rutherford New Jersey? Berry has the eyes to see (and apparently those schooled in mid-20th century poetry know this) that WCW was, in fact, an oddball of sorts: he wrote about common people in a real location, allowing his participation in the local neighborhood--his work, his friends, his neighbors, his church--to influence (indeed, to become to subject of) his extraordinary poems. He was belittled for this by the hot shots, and this is, of course, a part of the story. Berry took great inspiration in this (I wondered, to be honest, why William Carlos Williams wasn't in Imagination in Place as he seemed to exemplify that book's thesis. Now we know---Berry was doing a whole book on this same theme that structures Imagination in Place, using WCW as the great example.)   I should say that it is only my lack of vocabulary that causes me to say Berry is "using" WCW as an "example." Berry is more subtle than that, more nuanced and insightful and kind. But, still, the Borger short-hand being what it is, I'd explain the book like this: he illustrates how a sense of place (in this case Rutherford and Paterson NJ) shaped and influenced and became fodder for the great work of this too often misunderstood poet and doctor, the fascinating William Carlos Willliams. And how Berry himself does that in his own Kentucky homeland, drawing inspiration from Dr. Williams.
Posted by Bonnie at 6:14 AM 1 comment:

"Isn't it funny the way some combinations of words can give you - almost apart from their meaning - a thrill like music?"


Humming tunes from recent
musical shows that my daughter
was in AND half of my students
did a Musical Theater: Sound of
Music , Music Man, Cinderella,
and Seven Brides for Seven Brothers
( or is it the other way around!)
So today I'm humming
Pick a little, talk a little, cheep, cheep,
cheep, talk alot , pick a little more.

AND Birdland which the Teen Choir
did on Thursday night!

Just checked. Manhattan Transfer
will be in Boone in late July!
Closer than NYC ~~ although that
would be a fun summer trip!
Got to get tickets!

"She taught us that one natural
desire replace another and the
desire of excelling could not
coexist with the desire for
knowledge."

( The P U S Diamond Jubilee
about Charlotte Mason)

That sounds a bit
like Thomas Chalmer's
The Explusive Power of
a New Affection.

Don't you think that that
statement possesses wisdom
for lifetime learning?

Language has a voice: words.
Written or spoken.

I've read a tiny bit of Lewis this
morning in Readings for the Year.
I'm way back in early March !
OH dear.

I picked up Wendell Berry's essays
to look at while Emma is in piano
lessons. His voice ~ I always go back
to.

I am mentored by a dead educationalist:
Charlotte Mason and a living one: George
Grant.

Susan Schaeffer Macaulay and her father
and mother, Francis and Edith,
continue to resonate truth
and especially grace. Living ideas.

All writers with a voice.

Who are you listening to? 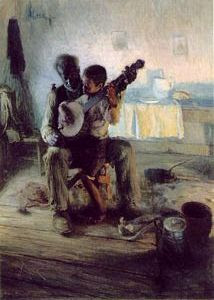 painted in the Blue Ridge Mts.
of North Carolina.


Stunning.
Perfect Jane
and Mr. Rochester.
A bit of fun with Judi
Dench and there was
the actress who played
Anne Elliot from Persuasion
and Margaret from
Larkrise to Candleford.
Focus Films + BBC.
Excellent.

Plus a bonus upon leaving the
theater: the manager gave the
young ladies ( my daughter and
students ) a copy of the book or
the soundtrack. We got the CD.

What is Jane made of?

“Because,” he said, “I sometimes have a queer feeling with regard to you, especially when you are near me, as now; it is as if I had a string somewhere under my left ribs, tightly and inextricably knotted to a similar string situated in the corresponding quarter of your little frame. And if that boisterous channel, and two hundred miles or so of land, come broad between us, I am afraid that cord of communion will be snapped; and then I’ve a nervous notion I should take to bleeding inwardly. As for you, you’d forget me.” 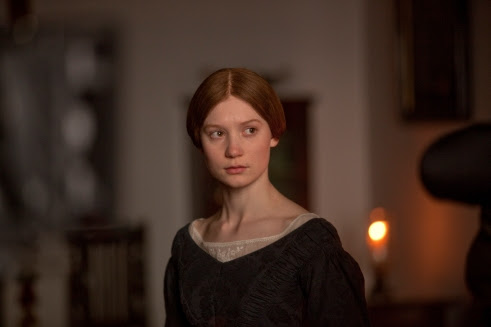 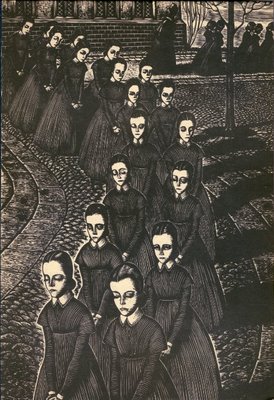 What are you made of?

In a class discussion on Uncle Tom's Cabin, I asked what Eliza was made of? She escapes with her child who was sold, a very young child, and runs to Canada! Wherever that is!!! That is what tickled me. Run, Mama Bear! We all have that in us as mothers. Protection. Eliza comes to a frozen river and actually jumps supernaturally holding her young child. Supernaturally. She knows God has protected her and given her Michael Jackson leaps!

I asked the students What she was made of?
What are they made of?

Courage to face depressing days.
Fidelity to a friend who hurts you.
Kindness to see when someone is sitting alone.
Friendliness when someone needs a good word.
Dignity to those who are different.
Righteousness that cares for the broken hearted.
( It might be the person sitting right next to you.)
Truthfulness that helps build a soul. 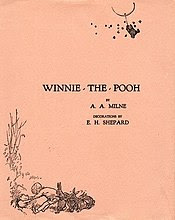 Oh bother! Can't you hear Pooh saying
that ......very windy today when you want
to work in the garden but the wind goes
right through one ear to the other.
Quite bothersome!
So that didn't get done!

Weekend was fun and full.
Photos to come.

Mathematics and "Don't Sit Under the Apple Tree"


After a long week of rehearsals,
DRESS Rehearsal for Emma's
Vaudeville Show was tonight!
Pictures to come. Two performances
tomorrow.

AND Mathematics Workshop
with Tammy Glaser in the morning!
(Special Needs right after lunch. She
is amazing in this area. Check her
blog by clicking her name,)
I can't wait even with only one
left to homeschool. Children do
grow up.( not all are Peter Pan!)

"Mathematics, grammar, logic,
etc... are not purely disciplinary,
they do develop (if a bull may be
allowed) intellectual muscle."
School Education, Charlotte Mason