Back here and then going there


Back from the beach which
gives that gift that Anne Lindbergh
wrote about in her book : timelessness.
She tried to capture it and bring it
back. I'm in a tight place of time.
I have one day at home then
into surgery on Monday for my other
hip. Arthritis is painful so I can't wait
to have it behind me and moving like
it use to before I got old!!! Thanks for
your prayers.


Heading to the beach for a week with
4 of my siblings ( 5 of us out of 8 will be
there) and 2 of my children. One son
will come down for one night to get the
other son. Paul MacCartney comes into
town and wooing those two back home
midweek! We would go, but I'm too old
to leave the beach if I really, really don't
have to. Would you?!!

Gathering my stack of books, good food,
and heading to the airport today to pick
up my oldest brother. He flies like we drive.
Retired American Airlines.

And this bit from my Scripture reading this
morning, in the rabbit trails of connections to
a new word. From Morning by Spurgeon to
Jer. 3 to my new found Bible at an Antique
Store ( James Moffatt translator, which Amy
Carmichael used among her many translations)
came this word: O TURNCOAT CHILDREN. He called the
Israelites Turncoats. English Standard calls them Faithless!
JER. 3:14

Good recipe here : Blueberry Breakfast Bars.
I made them last night to take IF they don't get
eaten today! Blueberry and Peach....summer!


Who has helped you to see?
To see grace.
Grace in the ordinary.
Not alongside you but how the
Spirit has lit up a sense of beauty
in thewords to see deeper,slowed you down,
stirred your inner being.
You are kinder. You are meditating.
You hunger for more . You seek the Word.
Susan Schaeffer Macaulay, Edith Schaeffer,
George Grant, Luci Shaw, Wendell Berry,
and Makoto Fujimura come to my mind.
Attentiveness to the ordinary is a gift these
have given me in their writings, letters, lives
seen from afar. Who have you had stir you
to wonder, worship, and awe?

Here is part of a poem from Harvesting Fog
by Luci Shaw. Her words "as if the third day of
Creation were just yesterday" made me read
Genesis. I will not look at weeds the way I do.
Well, maybe I will celebrate the pretty weeds!

I have always welcomed the perennials
but today I celebrate weeds. The arrival of
horse-tails, their primitive vigor thrusting up
under the fence as if the Third Day of Creation
were just yesterday. In penance, as redemption,
I will begin to touch the earth more lightly,
remembering to walk barefoot in the soft
forest so that I make no bruit or break…
(40, “Gardener’s Remorse”)

Horsetails have
segmented stems
( we call this snake grass)

I wish I had read some biographies like
this one when I was in high school. Mitch
Stokes started Isaac's life with a story about
a fight when he was 12 or 13. Here is the
first sentence:
" Isaac Newton could still feel the dull
ache in his stomach where Arthur Storer had
kicked him on the way to school that morning."

I found myself being drawn into the daily life
and the magnitude of the man who thought
deeply about God, discovered gravity, and
calculus. I learned that he kept journals on the
attributes of God. Quite a philosopher and
thinker! He became real to me, more than
an equation for gravity. I appreciated the
author's concise writing of the time period
plus the huge ideas Newton was discovering.
Think about this:

" You and the book in front of you share a special
connection --both of you exert a gravitational
force on the other. Not only that, you both exert
a gravitational force on everything else in the
cosmos, and everything else reciprocates. Everything.
Newton's theory of gravity is universal. It is a single
law that governs rocks as well as planets, and it finally
buried the Aristotelian view that there were two realms--
one of the starry heavens and another of the earth.
No longer were two separate theories needed; a
single theory would do. The cosmos was now a universe."

I will look for more biographies in this series:
Christian Encounters.
I would highly recommend this book in libraries
and in a curriculum.

Posted by Bonnie at 2:10 PM No comments:


Sunday's rest is always welcomed
after a trip. I got back home at
2:00 a.m. on Friday or should I say
Saturday morning. Back from Tenn.
and a conference that was excellent.
Last conference of the summer for me.
Rest is need on this day. I am thankful
for what God said to do today: REST! 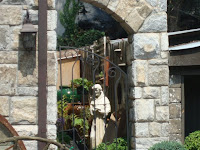 We could
see St. Francis
through the
garden gate of
this shop as
we passed. He
brought a sense

of beauty to the day. We were up in Highlands,
NC to celebrate my mother in law's 75th birthday.
I'm thankful for her health and fun we had.

I head out tomorrow again to this conference in
Franklin, Tenn. You can get a streamline of the
conference fairly inexpensively. It stays on your
computer for a couple of months. I need to find
out if I can get what I miss while I'm there.
What a world we live in. Too much and not enough
time.You can't be in two places at once!
The best thing about a conference are the
people and being there.

My "least one" ( borrowed term from Melissa)
turns 13 on Saturday.
She has seemed older for so long and
looks older. Maybe she is fitting right
into more of her age! I'm thankful for
my children and one wife and the wives
to come!

Gordan found a used bookshop called
Shakespeare and Co. It was delightful.
Great taste in books in a small yellow
cottage nestled behind the main street.
He wiped them out of Umberto Eco and
I found some Wendell Berry and great
children's books to give as gifts. I am
thankful for that local find.

Our anniversary today!
I've known him for 37 years.
That is getting to sound like alot
of years. It sounds old!
Young at heart . I still remember the
first time I saw him. I knew then that
I would marry him.


And that does not mean American Idol!!
It is the ones in our hearts. Lots of them.
That was the discussion at Book Club.
I highly recommend Tim Keller's book
Counterfeit Gods. It was a reread for me
and I think better the second time. His genius
is getting to the heart of the matter. He gets
down to the bottom layers.

I can count on my dear friend Podso to
do a lovely blog on our time. That is my
grandmother's china!

Leaving on a long weekend to the mountains
tomorrow as the heat arrives. Maybe it doesn't
like heights!


I remember hearing Tim Keller say
in a sermon that when he preached
about the Seven Deadly Sins, his wife
said : noone will show up for Greed.

Well, we have two full tables for a
Brunch Tea in the morning for our
Book Club. The book is about idols.
Imagine that bringing out the numbers!

Giving Thanks in Summer

We have had a gorgeous holiday weekend with
humidity down and clear skies. This
Monday I am cultivating gratitude.
It is one that stirs the mind. What are
you thankful for? You have to cultivate
gratitude , deep gratitude. It helps with
balance and gives hope.

I am thankful for my sister and her family
( minus her med. school son!) who came for
Brad's graduation from the Police Academy.
You know, family that gets up early , spends
several hours in the car to COME celebrate
this times with you. You know also when
it all works out with work, days , schedules.
But then to get up early and come.
We were blessed. Her son brought us some
beautiful photos blown up of Mt. McKinley.
He got to Alaska a week early and then spent
the rest of the time with Ken, Evan, and Gordan.
We are thankful . He's a good photographer.

I am thankful for the training my son had.
It was very hard: pepper spray, tazered, self
defense that included being in fights, test after
test BUT all to a very covenantal ceremony of
swearing on a Bible to uphold the US and State
Constitution. Those guys stick
together which is alot different than corporate life!

I am thankful for my youngest brother.
He is the baby of 8 children.
He takes care of this older sister.
Hip replacement in August.
Yes, the other hip.
The way the Lord is bringing healing
from osteoarthritis in that joint.

I am thankful for my neighbor who let
us pick blueberries, blackberries and
beans this morning. Abundance of
a crop means sharing.

I'm thankful for snow in June somewhere
in the world. Definitely in Alaska.

Do you know what day it is?


It was a grand celebration this
morning of our son from the Police
Academy. He goes to work tomorrow!
After some family came into town
for this, I wondered WHAT DAY it is?
Then I remembered it is FRIDAY!!
The weekend is ahead.