Learning from a Winner


It is always a blessing to meet
authors, especially one that you
loved listening to in their book
That was me when I
finished "Girl Meets God" many
years ago. I wanted to hear more
of her voice. I got to hear it LIVE
on Saturday.

She is writing another
memoir now. I have not been in
a "class" like this in years. Many.
I've been to lectures on writing, read
books about writing and READ.

She gave us many exercises to do both.
We wrote and we revised.

Now a few days later, I am thankful for
how it opened my mind to new ways of
seeing. We took a passage we wrote and
revised in by a child's point of view,
made a dialogue , use another sense instead
of sight, description of a person, and
many more. We started with writing our
My Name of this short chapter from
The House on Mango Street. In revising
my orginal writing about My Name , I used
my mother's point of view. That opened my mind
to memory because she has passed away.
I hope to write a memoir for my grand-
children , great, great, etc... on her so
they will know her. That is why I went
and need to do what she said: do it.

here's a link to another blog ( googled)
about a similar workshop Lauren did.

Rain instead of snow.

Lauren Winner's Writer's Workshop.
Excellent teaching. Lovely to meet
an author who is passing her craft
to others. Amazing mind. ( more in
another blog on what I learned)

Mission's Conference this week at our
church. The atmosphere is festive.
The air is full of the Spirit. The sounds
have foreign dialects.

Beauty of the past as we went on a field
trip to a museum for a tour of Renaissance
Paintings. Churches are not the same today.
Beauty has become plain.

Good worldview in Larkrise to Candleford.
Emma and I are watching Series 2 on Youtube.
The inner struggles surface in short amounts
of time on film. The writers show transformation
so well. I wish I could give such wisdom as Emma
Timmons or her husband Robert. "What is love"
is what Robert is asked to define. He thinks so deeply
to finally say: it is himself being himself with Emma.
Always. Laura gives him a poetry book
and he finally defines love by reading
Shakespeare's Sonnet 116:

Learning from a Writer

Wonder if she will talk
about blogs?


Great new things at the L'Abri
site including alot of Schaeffers
lectures free.

Take a look.
Excellent resource and source
to so many L'Abri workers and
the Schaeffers.

Posted by Bonnie at 4:55 PM No comments:

What are you reading Emma?


Question from my dear friend
to answer: what is Emma reading?
She just finished North and South
by Elizabeth Gaskill, She's reading
Cranford by the same author and
trying to finish The Days of Queen
Victoria. She's been to see Percy
Jackson and the Olympians:
The Lightning Thief twice
and it just came out. So the book
came off the shelf to see how it
was different than the movie. It
was but then I haven't read it or
seen it! Other books for school but
those are her heartbeat! I gave her
most of Masterpiece Theater's
recent productions in book form
and the movies for Christmas.

She loves the books better!
Way to go girl!

What are you currently reading?


Me:
Sir Walter Scott's The
Talisman and 66 Love Letters
by Larry Crabb......and little
bits of other books , but those
are the primary.

Here is Dr. Grant and what he
is reading! I've read Orthodoxy,
not The Origins of Species.
Plus The Chestnut King by N.D.
Wilson. I read 100 Cupboards.
Check out his blog. 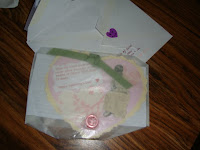 Valentines came in the mail! 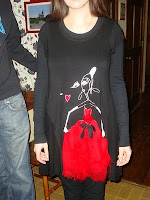 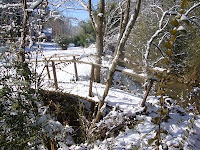 Snow down by the creek on Saturday 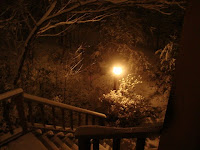 Friday night's Narnia at the bottom of our front stairs. 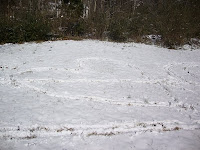 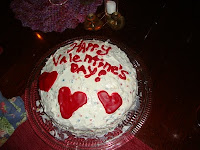 Valentine's Cake by Gordan's girlfriend Alex for us!
Delicious.

In all things, give thanks.

As the Olympics start, we got
a taste of it with snow late yesterday.
The world is stunning this morning.
Fluffy snow. It looks like the Larsson
painting and this poem:

It sifts from leaden sieves,
It powders all the wood,
It fills with alabaster wool
The wrinkles of the road.

It makes an even face
Of mountain and of plain, --
Unbroken forehead from the east
Unto the east again.

It reaches to the fence,
It wraps it, rail by rail,
Till it is lost in fleeces;
It flings a crystal veil

On stump and stack and stem, --
The summer's empty room,
Acres of seams where harvests were,
Recordless, but for them.

It ruffles wrists of posts,
As ankles of a queen, --
Then stills its artisans like ghosts,
Denying they have been.
Posted by Bonnie at 6:36 AM 1 comment:

Have you seen Masterpiece Theater's Austen Men or House


Emma and I are looking at the wonderful
new things on Masterpiece Theater.
Austen's Men is fun. We giggled at the
incomes and who is the most wealthy
and what they like and don't like. We
have our favorites and favorites of who
played in which version.

Also her house is most interesting.

We agree with Romola Garai's
take on Emma. Of course we like
Emma. My Emma is named for her!
I was taken with Austen's portrayal
of repentance in Emma's character.

Don't miss the Behind the Scenes of
this most recent version. One quote by
Mr. Weston: This era has a certain
grace. ( yes, indeed)

Emma just finished this book
after the wonderful Masterpiece
Theater show last Spring. She
said to me, "You must read it."
She wouldn't tell me the book's
ending ( they do get married)
as it is a bit different from the way
the movie did it? She said YOU
have to read it!

Here was her dictation today:

"As angels in some brighter dreams
Call to the soul when man doth sleep,
So some strange thoughts transcend our wonted themes,
And into glory peep."
— Henry Vaughan —

Mrs. Hale was curiously amused and interested by the idea of the Thornton dinner party. She kept wondering about the details, with something of the simplicity of a little child, who wants to have all its anticipated pleasures described beforehand. But the monotonous life led by invalids often makes them like children, inasmuch as they have neither of them any sense of proportion in events, and seem each to believe that the walls and curtains which shut in their world, and shut out everything else, must of necessity be larger than anything hidden beyond. Besides, Mrs. Hale had had her vanities as a girl; had perhaps unduly felt their mortification when she became a poor clergyman's wife; — they had been smothered and kept down; but they were not extinct; and she liked to think of seeing Margaret dressed for a party, and discussed what she should wear, with an unsettled anxiety that amused Margaret, who had been more accustomed to society in her one year in Harley Street than her mother in five and twenty years of Helstone.


This is what my husband said
this evening ~~ and that a police
officer was here. "Here" was Emma's
room! There stood Brad , all geared
up, handcuffs and a fake gun and
his cadet uniform!!! I've never seen
my husband so excited. Well, yes I
have. But those handcuffs are sort
of like the ones the boys played with
when they were little. Don't all boys
have fake handcuffs? But there's
something about the real thing.

The real gun comes later. He's got to learn
how to use it before acquiring it!

Thankful for Much this Monday


My free book came in the mail today
from Thomas Nelson Publishers.
Somehow it touched me with the title
and knowing that Crabb will be digging
deep to the roots. Same number as the
books in the Bible!Maybe it is my love
of letters in the title.
Real ones in the mailbox.

It was like a hug in the mail.
A real hug this afternoon from
a friend who was in town as
we met for a brief coffee !
AND my lost library book
was on the library shelf!
NOW that was something to
be thankful for after looking
under beds, behind chairs, in
between other books to find
the Christmas book! So I thought
I would check the library. There it
was back on the shelf but still on
my card! I did say to her " Thank
the Lord we found it!!" (like she had
something to do with it, but I was
so thankful)

Now every Monday a habit has occurred
because of Ann at Holy Experience.
She always has beautiful photos of the
landscapes of her life in Canada . I love
reading her "eyes" in her words.
I don't walk around with a camera, in fact, I
usually forget it to important events. I have
no idea where it is at the moment. That
is Emma's department. So for her memory
in my old forgetfulness, I am thankful! I
think she keeps it in her room. Well, now
I know where it is!


Online activity sometimes gives
a different kind of reading, sort
of like reading magazines. I'm
thinking deeply after reading many
articles spurred on a discussion from
Charlotte Mason's Vol 2, Parents
and Children. We had watched
Frontline: Digital Nation
on PBS this past week. It is worth
seeing ( 90 minutes) and discussing.
CM was evaluating current educational
methods in the section we read. That
made me think WHAT is going on today.
How is multitasking changing the brain
and learning? How is technology changing
our lives as well as our educational system?
So in reading my literature class' current
book: The Talisman by Sir Walter Scott
( Third Crusade) , it is a slow reading
because he is detailed and he uses
language that is rich. One of my students
said " I find myself passing a paragraph
too quickly for understanding and going
back to reread it." YEAH. Has the computer's
quick pace made us jump from paragraphs
to paragraphs and skim over the richness
of language, place and heritage?

click on his name to see where he lived!
I want to go there. I want my students
to long to go there.

Five Cities That Ruled the World

Interesting article in the
Washington Post by the
author, Douglas Wilson,
on his book. Washington
isn't one of those cities but
lots of people from the 5
cities live in that city.

Posted by Bonnie at 5:21 PM No comments: 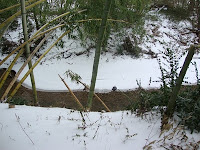 Down by the
creek at the
back of our
yard.

While the snow came and stayed,
I stayed in the kitchen! My house
filled to 7 and then 9 on Sunday
night for my husband's birthday.
We had church at home in front
of the fireplace and at the breakfast
table to listen to Tim Keller .
I had made Baked Oatmeal and
Cinnamon Rolls from this blog:

Finding Joy in My Kitchen

My daughter made the cinnamon
rolls again this morning and the
same thing happened with less
family here: GONE!

Birthday dinner:
I made Shrimp Bisque from
Tyler Florence, tweaking it to
what I had in the house but
most importantly the main
ingredient was in the freezer!
Then Julia Child's Boeuf
Bourguinon. YUM!

To the family at the table, I
am thankful! To the food that
the Lord has given us, I am
thankful. To the feeding of the
Word by a favorite pastor,
we are thankful.

And I'm thankful for my husband!
His legacy was sitting around him
this past Sunday!